The main distribution area of ​​the species is on the Balkan Peninsula. The subspecies “meridionalis" inhabits the territory of Albania, Macedonia, Greece, the southern parts of Serbia, Montenegro and Asia Minor. It is a typical snake for dry rocky slopes with sparse vegetation and sunny forests. This viper is a mainly lowland species, which usually could be seen at up to 1,200 m above the sea level, but there are exceptions, such as the Galicica Mountain, where this species could be found at up to 1,700 m. The nose-horned viper usually climbs bushes but can also be seen beside cracks in rocks and stones searching for lizards.

Generally speaking, the viper is of a daytime type, but it can sometimes be of a night type, in the warmer parts of its range. It is a slow and almost phlegmatic snake, not very irritable, although when disturbed it whistles loudly. It is the most dangerous snake of any other European viper, and it is fatal, especially before modern treatment was available. During a field research, when the spring and summer of 2008 were very dry and warm, a reduced activity of the species was noticed. Therefore, the field findings for this species do not correspond to the actual frequency of the species in NP Galicica. As part of our field research, the viper was recorded at only five sites: the island Golem Grad, the cliffs near Stenje, Stenje swamp, the rocky hill above the village of Leskoec, Dva Javora and near the Red puddle. 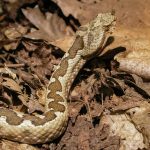