Stellar fungus is a species derived from the Latin words Geo (earth) and Astrum (star) belongs to the family (Geastriaceae) and is not an edible fungus. It is characterized by its appearance that resembles a star at the base that carries the spore material in a dome at the top. The color is dark brown and the size varies from 6 to 8 cm in diameter. The exoperidium (outer layer) is dissolved in 4 to 5 rays forming the star-shaped base attached to the soil by rhizomorphs. The species is most commonly found singly or in small groups in coniferous forests. 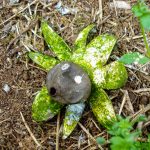