The distribution range of the speices is confined to the eastern coast of the Adriatic Sea. On Mount Galicica, the species penetrated easternmost and deepest into the mainland, within its entire distribution range. The Balkan whip snake lives in dry rocky areas, open forest areas, areas with bushy vegetation, by the roads. This snake is of daily and terrestrial type, though it sometimes climbs the bushes. It fiercely bites when grasped by hand. On the territory of the NPG, the Balkan whip snake was recently recorded in the oak belt near Oteshevo and Leskoec by the author of this report (unpublished data). As part of field research, the presence of the Balkan whip snake has been confirmed at the same sites.

Of the European documents, the species is protected in accordance with the Convention on Conservation of European Wildlife and Natural Habitats (BERN) – Appendix II: Strictly Protected Fauna Species. 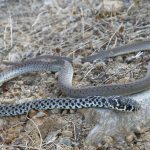