The distribution range of this species covers much of Western, Central and Southern Europe. This species is most commonly present in deciduous forest areas (less commonly in evergreens), especially in those with an altitude below 800 m. The fire salamander is active only at night, except in periods after rain. The mating season of the fire salamander is autumn, and after 6-8 months (next spring), females usually give birth to 8 to 70 larvae, usually in cold and clear waters, both in standing and running. The larvae live mainly at the bottom of the aquatic biotope, where they can hibernate, although they usually metamorphose in 2-4 months. They mature sexually at the age of 2-3 years. Adult species hibernate in groups or individually in holes excavated by other animals, caves or rock crevices. At the Galicica National Park, the fire salamander is recorded in the oak and beech forest belt, at an altitude of 1,600 m above the lake shores of both lakes. 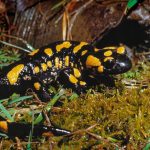