The species is widespread throughout much of Europe, with the exception of the northern and central parts. The European pond terrapin is usually found in stagnant or low-flow waters, overgrown with aquatic plants and abundant aquatic vegetation, such as ponds, lakes, rivers, canals, swamps, marshes and ditches. The mating season is spring, with the eggs burying on the waterfront. The incubation of the eggs lasts from 65 to 100 days, depending on the temperature. Sexual maturity in males is between 6 and 12 years, and between 14 and 18 years in females. The European pond terrapin mainly hibernates in water, less frequently on land. In the NPG, this species is confined to marshy areas along the shores of both lakes. As part of our field research, the presence of the European pond terrapin has been recorded in the springs of St. Naum and in Stenje swamp. 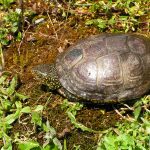