The distribution range of the species covers much of Europe. In the northern parts of the continent, it could be found in the lowlands, while in much of southern Europe it is confined to the mountain zone. The smooth snake is a daily snake, although it usually hides and inhabits different types of dry, sunny habitats. This snake avoids extreme temperatures and is often active in the afternoons, in warm cloudy conditions and even at night, in hot weather. It is often found sunbathing hidden in vegetation, or beneath metal scrap. This snake is poorly movable and phlegmatic, but it bites if touched and releases stinking fluid from the anal glands. It mostly mates in spring (April-May), but it can mate again in the summer (August-September). The eggs are brought into hibernation for the snakes to be born after the female has gone out of hibernation (in the spring). Within the NPG, the smooth snake is associated with the beech forest belt, at 900 – 1,850 m height. 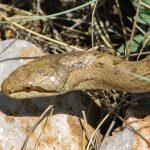