The species is widespread throughout much of Europe, while the “graecus” subspecies is confined to the southern part of the Balkan Peninsula. This newt is a relatively common species, primarily living in temperate puddles in the lowlands. Compared to the Macedonian crested newt, it is not as strongly associated to aquatic biotopes, with the exception of mating and hibernation season. The smooth newt mates in calm, mostly shallow waters (from March to May), always preferring small ponds overgrown with vegetation, ditches and more. Their larvae live close to the bottom of the puddles, unlike the adult ones, who prefer the surface. Males reach sexual maturity at 2 to 3 years and females slightly later. Adult animals usually hibernate in aquatic biotopes. Within the NPG, the species can be found from marshy lakeside areas to temperate puddles and ponds up to 1600 m above sea level. 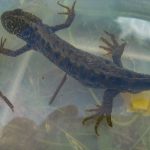 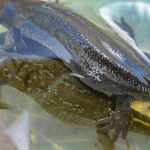 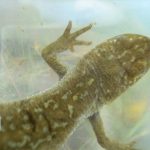