A type of lizard from the family of true lizards, whose range extends throughout almost whole Europe and east to Mongolia.

It has a bright belly and a stripe on its back: males are darker in color and become partially or completely green in the mating season. They reach a length of up to 25 cm.

There are several subspecies, the westernmost of which is Lacerta agilis agilis. In this and the other two most common western subspecies (Lacerta agilis argus) the back stripe is thin and dense, or absent. This is especially true for the third species, which has phases when it is quite red and brown on its back, without any marks. In these two subspecies, males seasonally turn green only on the sides, but in the eastern species (predominantly Lacerta agilis exigua), males can be completely green, even outside the mating season.

The females lay their eggs in soft sand ona sunny place, and the young lizards grow thanks to the heat of the sand. 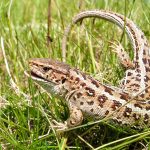