In Central Europe, this frog inhabits areas of 600 to 800 m above sea level, while in the southern regions, including the Balkan Peninsula, it rises to much higher altitudes up to 2,300 m (Arnold, 2002). The European tree frog prefers dense vegetation, shrubs or trees, or swampy areas. It is mainly a nocturnal or twilight species, but is sometimes active during the day, especially when the weather is warm and humid. It spawns in calm temperate waters. The mating season lasts from March to May. The European tree frog hibernates on the ground. Within the NPG, the species is most abundant in swamps beside lakes, wet mountain meadows, open forest areas, at an altitude of up to 1,500 m.

According to the European documents, the species is protected in accordance with the Habitats Directive 92/43 / EEC –Annex IV: Animal and Plant Species of Community Interest in Need of Strict Protection, the Convention on Conservation of European Wildlife and Natural Habitats (BERN) – Appendix II: Strictly Protected Fauna Species. 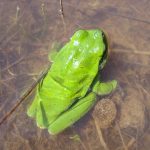 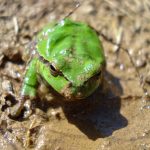 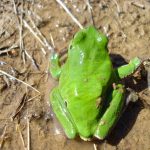 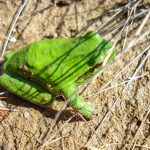 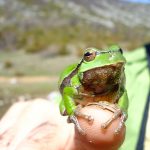