The main distribution range of the species is in the southern and eastern part of the Balkan Peninsula. This snake is a daily animal, fast and mainly terrestrial, inhabiting dry, open habitats with poor vegetation. It’s always sunbathing on the roads, and therefore mostly dies from roadkill. The large whip snake is a very aggressive snake and usually does not retreat when attacked. When you get close, it’s constantly tapping its tail and is ready to bite if touched. When hunting, it can climb 5 to 7 meters along shrubs and trees (Arnold, 2002). Within the NPG, the species is relatively frequent at lower altitudes, from the shores of the lakes to 1,150 m. 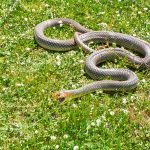