The brown bear is a species of omnivorous mammal from the Ursidae family, weighing between 100 and 700 kg and belonging to the group of largest terrestrial carnivores. Brown bears have thick fur in creamy, brown and black colour, and in combinations of these colours. Above their shoulders they have a large hump made of a muscle that distinguishes them from other species. The brown bear's claws are up to 15 cm, they are non-retractable and used mostly for digging. This species feeds mostly on plant, root and fungus foods. Fish are their main source of meat, but they also eat smaller mammals.

In Macedonia, the animal mostly lives in the mountainous areas of the western, central and southern parts of the country, and occasionally occurs in the eastern parts. In the Galichica National Park, the brown bear lives in the oak and beech forests. The area of ​​the territory on which it is actively moving exceeds the territory of the Galichica National Park. Despite this fact, the long-term monitoring has the potential to provide relatively good data on the number of brown bears that occasionally or continuously use the NPG territory, as well as the trends in this parameter. The brown bear is a species indicative for the effectiveness of the measures taken to protect wider area, hence it is accepted as an umbrella species.

The brown bear is protected with the European document – the Habitats Directive II/IV, as well as with the Convention on the International Trade of Endangered Species of Wild Fauna and Flora (CITES). 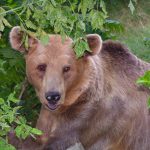