The yellow-billed chough (Pyrrhocorax graculus) – a bird from the crow family (Corvidae), one of the two species of the genus Pyrrhocorax. Both subspecies breed on the high mountains of Spain, southern Europe, including Northern Macedonia, North Africa, India, China.

The yellow-billed chough has a glossy black feather, a yellow beak, red legs and a recognizable sound. It is 37-39 cm long, with a wingspan of 75-85 cm. It flies with very wide and jagged primary feathers, with frequent floating. This bird's flight is fast and acrobatic, with less frequent, deep wings swinging. The yellow-billed chough is a monogamous bird. It places the nest in a cave, a deep crevice in a rock, or an abandoned object.

The nest has 3-5 shiny whitish eggs with tiny brown spots. The embryos of birds that breed at high altitude have a haemoglobin with a genetically determined high oxygen affinity. 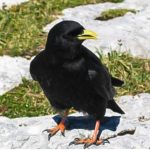