The stone loach (Barbatula barbatula) – freshwater fish, belonging to the family Balitoridae. This fish is widespread in all European waters. The stone loach has a long flat body, its small mouth is surrounded by sensitive fibers, mustache, which make it a very unusual fish.

The head is flat from above, with moustache around the mouth, four at the top and two at the corners of the mouth. The freckles, which resemble marble, form stripes along the grey body. There are dark freckles on the fins. Unlike the others, the European stone loach has no scales and is 7-11 cm long.

The stone loach spends its day hiding among the rocks, and thanks to its ability to camouflage, it’s often found in clear rocky streams, unpolluted streams and rivers. At night it goes out of its shelter in search of food.

During the spawning period, both males and females have lumps throughout the body. They spawn during spring and summer and lay 6,000 eggs that are stuck to underwater plants and rocks. Young fish feed on small organisms at the bottom. 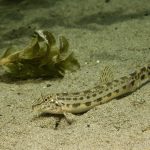