The rock partridge (Alectoris graeca) – a bird from the pheasant family, the order of the Galliformes. It is widespread in southwestern Asia and south-eastern Europe.

The rock partridge is also found in Macedonia. The rock partridge has a stone-like colour, hence its name. Most often it is grey, with light brown back, grey breasts and creamy belly. Its face is white with black lines and its wings have square patterns. It could be up to 36 cm long, and its wingspan reaches up to 60 cm.

It lives in dry and open areas, often in hilly regions. It creates small flocks and is not a migratory bird. It makes the nest on the ground and lays 5-21 eggs. When upset, it runs more than it flies. It feeds on various seeds and insects. 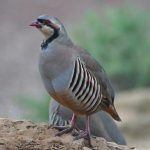