The European nightjar (Caprimulgus europaeus) – the only species of the nightjar family throughout Europe and Asia. The nightjars are 25-30 cm long, weighing 50-100 grams and have a wingspan of 53-61 cm. Males differ from females by the white spots on their wings and tails.

The nightjar flies at night, usually at sunset, looking for food. It mostly hunts moths and other large flying insects. During the day, it lies quietly on the ground, covered with feathers.

The nightjar migrates late and rarely appears before the end of April and early May. In summer, it migrates in northern and central Europe, and in winter in Africa. 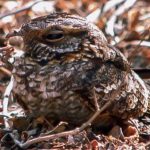