A Mediterranean species that is confined mainly to the Balkan Peninsula and partly to the Apennine Peninsula, including Sardinia and Corsica. In Macedonia, the Hermanns tortoise is represented by the subspecies “boettgeri", which is a Balkan endemic species. It is found in various types of habitats, including lush meadows, cultivated areas, hills covered with bushes, bright forests etc. In the western part of its distribution range, it could be found up to 600 m above the sea level, and in south-eastern Europe up to 1,500 m. The Hermann’s tortoise is active throughout the day. In spring and autumn, it is active all day long, and in summer only mornings and evenings. The mating takes place in April and May, and the eggs are incubated after 2 to 3 months. The tortoise hibernates on the ground in holes at a depth of 40-90 cm. Males become sexually mature at the age of 8 to 12 years and females at the age of 11 to 13 years. As part of our field research, we recorded this type on numerous locations on both sides of the mountain (east and west), at altitudes of up to 1,250 m. The most abundant population of the Hermann’s tortoise is present on the island of Golem Grad.

It is a Balkan endemic species that could extinct due to its limited distribution range, which covers natural habitats with disjunctive distribution.

f the European documents, the species is protected in accordance with the Habitats Directive 92 /43/ EEC – Annex II: Animal and Plant Species of Community Interest Requiring Designation of Special Areas of Conservation, Annex IV: Animal and Plant Species of Community Interest in Need of Strict Protection, the Convention on Conservation of European Wildlife and Natural Habitats (BERN) – Appendix II: Strictly Protected Fauna Species, as well as the Convention on the International Trade of Endangered Species of Wild Fauna and Flora (CITES). 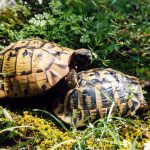