The species is widespread in Europe, with the exception of the northernmost parts and the Iberian Peninsula. It prefers light, relatively dry deciduous forests dominated by oak, but it also tolerates beech, birch and chestnut forests. It is also found in coastal forests, beside rivers and streams. The agile frog is mainly a twilight or nocturnal species but can sometimes be found during the day. It is not related to aquatic biotopes except during the mating season (end of February to April). It nests in permanent or semi- permanent standing waters. The agile frog usually hibernates in water, rarely on the ground. In the NPG, the species is relatively frequent from the lakeside up to1600 m, mainly in the forest belt.

Of the European documents, the species is protected in accordance with the Habitats Directive 92/43 / EEC –Annex IV: Animal and Plant Species of Community Interest in Need of Strict Protection, the Convention on Conservation of European Wildlife and Natural Habitats (BERN) – Appendix II: Strictly Protected Fauna Species. 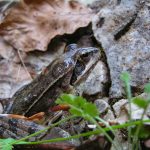