An Eastern Mediterranean type of snake commonly found along forest edges and hedges, open forests and rocky slopes. It prefers warm and shady places, mostly humid habitats, as well as wetlands, and it could also be found near puddles and streams. It often hunts in warm and cloudy conditions in the twilight, climbs well on trees and swimms. The four-lined snake is a relatively phlegmatic and poorly moving snake. It is the largest and most robust snake of all large European snakes, reaching a length of about 260 cm. Within the NPG, it is present at altitudes starting from the lakeshore to 1,650 m in open forests, clearings and dry grassland. The author of this report recorded the presence of this snake at the Preslap site (1,600 m), a rocky hill above the village of Leskoec, in the meadows near Glajsho puddle and near the mountain house.

Of the European documents, the species is protected in accordance with the Habitats Directive 92/43 / EEC – Annex II: Animal and Plant Species of Community Interest Requiring Designation of Special Areas of Conservation, Annex IV: Animal and Plant Species of Community Interest in Need of Strict Protection, the Convention on Conservation of European Wildlife and Natural Habitats (BERN) – Appendix II: Strictly Protected Fauna Species, as well as the Convention on the International Trade of Endangered Species of Wild Fauna and Flora (CITES). 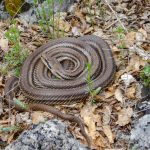