The Balkan snow vole belongs to the mammalian class, the order of rodents (Rodentia), and is an endemic species that is the only representative of the extinct Pliomyini group. It is endemic to the Western Balkans. The species occurs in 3 allopatric (geographically separated) phylogenetic gene lines. The Galichica Mountain is the southernmost point of the range of this species that has probably disappeared in recent decades. The findings so far point to the conclusion that the threat is a result of the competitive superiority of the European snow vole (Chionomys nivalis), which occupies the natural habitats of the Balkan snow vole and suppresses it.

It lives in the rocky habitats of the Galichica National Park. According to the IUCN World Red List of Threatened Species, the species Dynaromis bogdanovii is classified as vulnerable by status (VU). 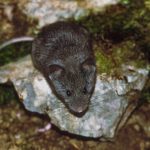