The distribution of the “scabra" subspecies is limited to the Balkan Peninsula. This toad is a highly aquatic and social amphibian, which occurs in shallow, sunny and most often in temperate waters. For nesting, it uses puddles in open forests or near forest edges, as well as different types of standing waters. This species is extremely rare over the forest zone (Sidorovska et al., 2006). The yellow-bellied toad is mainly a daily species, except during the mating season, when it can be active at night. The mating season starts from the end of March and ends in May-June. Adult individuals hibernate outside the aquatic environment. In the NPG, this frog is with a disjunctive distribution that is confined to marshy areas along both lakes, mountain springs, and in temperate puddles and ponds.

The species is Balkan endemic and is protected in accordance with the European document – Habitats Directive 92/43 / EEC – Annex II: Animal and Plant Species of Community Interest Requiring Designation of Special Areas of Conservation. 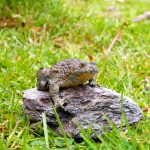 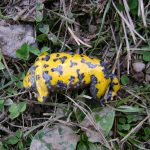 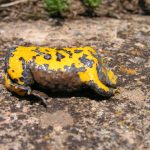