Europe's distribution range is limited to the southern and eastern parts of the Balkan Peninsula. It is mainly lowland, closely related to the oak forest belt. The snake-eyed skink is mainly active in spring and autumn, but also after rain. It's not particularly fast, but it can skilfully hidе in its habitat with sparse vegetation. On the Mount Galicica, the snake-eyed skink has only recently been recorded at one site near the village of Leskoec. Through our field research, we confirmed the presence of this species at the same site (a rare oak forest above the village of Leskoec). 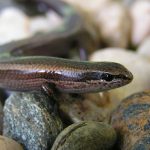